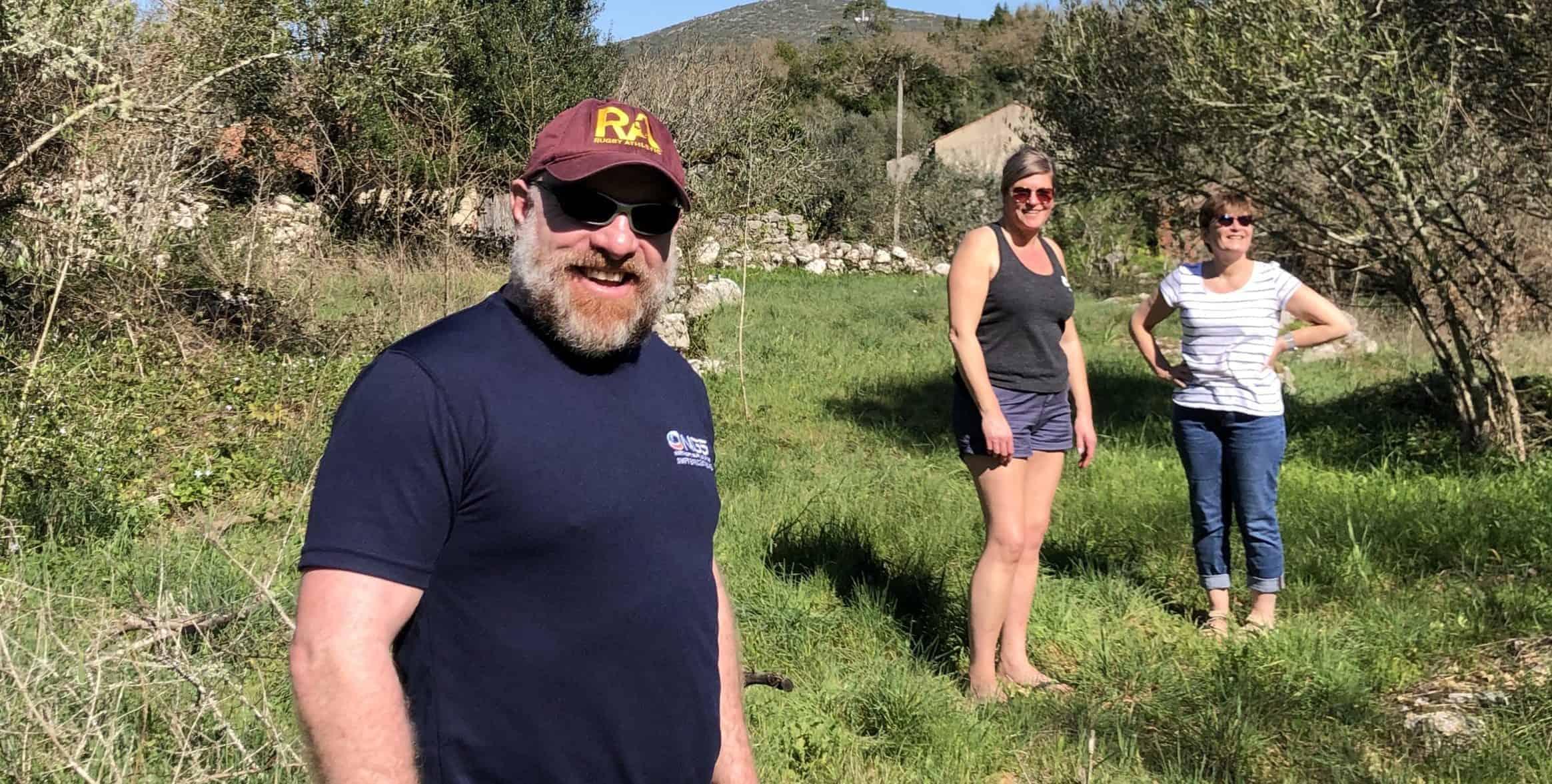 It has been the webmaster’s desire for some time to operate out of Portugal at a more leisurely pace.

The first phase of this objective was to purchase some land on which to build a house.

Unfortunately during last year, serious forest fires meant some new laws in Portugal, which puts a responsibility on land owners to keep their rural properties within certain clearing constraints.

This fell at the worst possible time for the webbie, as he had recently undergone back surgery and broken his ankle just before meaning to travel out and clear the land!

MWA Oppo’s to the rescue!

So, two stalwarts of the MWA were chatting over a few beers, the idea was planted by Taff Bow to offer his services and to form a Naval Working Party (NWP)!  The opportunity arose when the Ronnie and taff’s ‘directors-of-operations’ both had leave that fell on the same dates. So the necessary arrangements were put into action.

Time to put the plan into action!

A suitable time was arranged to fly out to Lisbon, be collected and transported to base-camp. Base-camp being close friends of Netty and Ronnie who live 10 minutes from the proposed house site.

Taff’s quick thinking took advantage of the forces discount card and booked us some parking and the morning relaxing in the airports premium lounge! (More about the parking later!).

So the NWP being duly formed and refreshed flew to Portugal escaping storm George and the wet and windy weather of the UK, landing with not a cloud in the sky and a very comfortable 24 degrees. Transfer to base-camp was about an hours journey and a swift few beers and BBQ were the order of the day while plans were made for a day off, followed by an early turn-too the following day.

The land clearance started in earnest as the girls, Veronica, Andrea and Netty got to work stripping brambles out of the olive trees and clearing the northern boundary while Taff took charge of a petrol strimmer and started clearing a jungle of brambles and poison ivy at the southern boundary, while Ronnie and Pete were busy chainsaw trimming the trees and stacking waist to be burned (which can only be done during the winter months, (the first day being about 23 degrees in the Shade!!). Taff’s arms were evidence that it was indeed poison ivy! But beer seems to lessen the effects.
The first days labor being at an end it was time for more beer and another splendid BBQ provided by our hosts and NWP hero’s Pete & Veronica. Taff was then shown a rare bottle of spiced rum which he professed a distaste of, but duly downed half the bottle! He quickly realised the folly of his actions and headed for his pillow before the night got going!

Day one was such a Herculean effort put in by all parties that it was quickly discovered that the bulk of the effort was done and the rest of the days were more about tidying the land and trimming off the trees a bit more. What was learned on day two however were that we needed more and bigger tools!  So an evening Indian meal at the seaside town of Nazerè was planned with a detour to purchase another chainsaw and cutters etc.

The rest of the week was much of the same with fine weather and clearing scrub and burning the unusable wood and brambles of which there was a lot. By the end of the week we were all covered in scratches which would probably have social services put us on suicide watch if they had seen our arms!

There is a long way to go on this journey, and with Brexit happening we have had to keep a close eye on any implications it would have on our plans. However armed with the knowledge that the Portuguese have always been one of strongest allies and the signs from the Portuguese government have all been positive, we will battle on to get the retirement off to a great start.

There will always be plenty to do before, during and after the build so am considering whether a further NWP might be required, depending on support of course.

But if this tale shows one thing, its that your oppos are always there and will always help out if you need it! The MWA spirit was riding high throughout the week and everyone Had a great time. New friendships were forged and future holiday destinations explored too!

The parking??? Well, Mr Bow was a day out in his calculations which lead to not being allowed to leave the airport without paying. Anyone who know Taff can probably guess how that conversation went!!

If you have a story about you and your shipmates, and things you have got up to, why not get in touch and tell us about it.